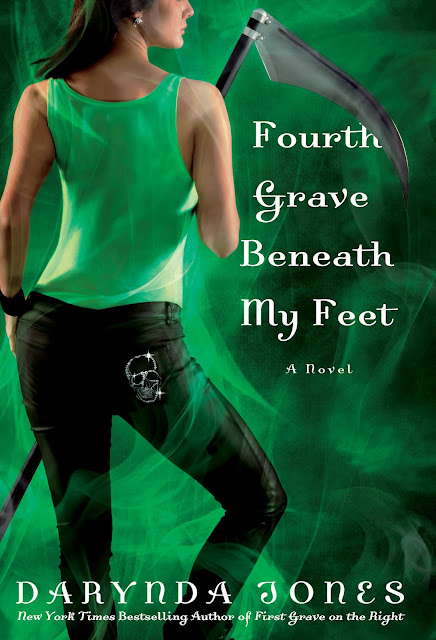 "Welcome to the world of grim reaper extraordinaire, Charley Davidson. Try as she might, there's no avoiding her destiny. Sometimes being the grim reaper really is, well, "grim." And since Charley's last case went so awry, she has taken a couple of months off to wallow in the wonders of self-pity. But when a woman shows up on her doorstep convinced someone is trying to kill her, Charley has to force herself to rise above . . . or at least get dressed. It becomes clear something is amiss when everyone the woman knows swears she's insane. But the more they refute the woman's story, the more Charley believes it. In the meantime, the sexy, sultry son of Satan, Reyes Farrow, is out of prison and out of Charley's life, as per her wishes and several perfectly timed death threats. But his absence has put a serious crimp in her sex life. While there are other things to consider, like the fact that the city of Albuquerque has been taken hostage by an arsonist, Charley is having a difficult time staying away. Especially when it looks like Reyes may be involved. Just when life was returning to normal, Charley is thrust back into the world of crime, punishment, and the devil in blue jeans."

I love a good series. And this one is one of the bests. If you go through my blog, you'll find that I have read all these books and have had nothing but absolutely awesome things to say about them. And this book.......oh my god...kick ass!

Where do I start in raving about this book? How about the beginning? Sure why the hell not? Darynda Jones has this amazing way of start a book off where it might sound like something serious, but then Charley's quirky sense of humor cuts through the dark and lightens up the story. I feel that Charley is everyone woman's crazy best friend that knows not only how to have a good time, but also know how to talk herself out of trouble. We still have that awesome personality, but it seems to be tempered by PTSD  which was caused by the man who tortured her in the previous book (I wont go into as I do not want to provide you with spoilers. However, if you havent read this series yet, shame on you).  Her though process and denial is very Charley, however, we are still able to relate with her and cheer her on. Whether she is contemplating the name of her couch (I really liked Malibu Barbie), saving a deaf teen from being possessed by demons, learning about her supernatural heritage, or getting to know Reyes in the physical realm.

Yeah. Reyes. Let us talk about him for just a second. Ms. Jones' obviously spent a lot of time making this man the sexiest man in all of paranormal romance. A Brazilian Supermodel dipped in sensuality? Yep. Pretty Much. And that scene with him and Charley...oh my goodness, I'm fanning myself just thinking about it. Charley and Reyes are complete opposites of each other but the cannot help but be drawn and attracted to each other, no matter how much they drive each other bat shit crazy.

I loved all the little sub plots and their twists and turns, providing Charley with a good amount of challenges to overcome and face. My only issue was Swoopes. He is just such a great character or Charley to play off of, however in this book i felt he was short changed as a character. He was moody and bipolar...which yeah I get since he died and came back. However, I felt that he was a little out of place in the book. I felt that Swoopes had to be mentioned in the book, and all his interactions with Charley awkward and forced. But that's just me....

I really love this series and I absolutely loved this book. Also, Darynda Jones is one cool lady which is just a bonus. Back at the beginning of the year, I won the audio book for Fourth Grave Beneath My Feet. I mentioned my amazing good luck on Facebook and she commented on the status congratulating me. She is so nice and gracious with her fans. It really makes me love her books even more.
I applaud your awesome-sauce, Darynda Jones. Bravo!

On a side note, I'm on vacation this week, so lets hope I can knock out a review or two and shave off a book or two off my to be read list.