I opened this book and read the first page…and I…well, there are no words…just completely gobsmacked…

“Around the world, black handprints are appearing on doorways, scorched there by winged strangers who have crept through a slit in the sky. In a dark and dusty shop, a devil’s supply of human teeth grown dangerously low. And in the tangled lanes of Prague, a young art student is about to be caught up in a brutal otherwordly war. Meet Karou. She fills her sketchbooks with monsters that may or may not be real; she’s prone to disappearing on mysterious "errands"; she speaks many languages not all of them human; and her bright blue hair actually grows out of her head that color. Who is she? That is the question that haunts her, and she’s about to find out. When one of the strangers—beautiful, haunted Akiva—fixes his fire-colored eyes on her in an alley in Marrakesh, the result is blood and starlight, secrets unveiled, and a star-crossed love whose roots drink deep of a violent past. But will Karou live to regret learning the truth about herself?”

So I’m not too sure where to begin with this review other than, well, some curse words. Holy shit. This story is amazing. There are so many elements in this unique tale that make it such an outstanding read. But still the question remains? Where to start? Well, I suppose at the beginning. And since there is so much in this book, I'll keep this review focused on just a couple of things. Because I could in turn write and entire book about this book. And really, who has time for that?

Karou is a strong female hero, with a mysterious past that she is unfamiliar with. She is a perfect combination of realistic teenager and fantasy lead. Her blue hair and tattoos make her stand out in public, however, her attitude make her a likable character. Which, by the way, is an awesome relief. I have read a ton of young adult books that have lead female characters that by the time I finish reading the books, I am really not liking who is suppose to be our hero. But Karou…I love her. She is a genuine character who you can totally get behind and root for.

My favorite thing about this book was probably the setting. How many books have you read where the stories were set in Prague? The way Laini Taylor described the city made it absolutely beautiful and mysterious. The world building Laini Taylor does is seamless and breathtaking. The reimaging of demons and angels was interesting and intense and (like everything else in the book) mysterious. There is not too much I can go into without giving away a big ol’ chunk of plot and stuff…but trust me when I say that right near the end of the book…shit gets real.

So do I suggest this book? Hells yes I do. This is an epic tale filled with action and mystery and love and betrayal and anything and everything between that makes a story about a girl with blue hair living in Prague caught between an ancient war between angles and demons. It is not only beautiful, but heartbreaking.

Damn I love books.
Until next time folks: keep reading!

(As a side note...this is what the first page looks like. Tell me right now that does not make you want to stop what you are currently reading and go find this book?) 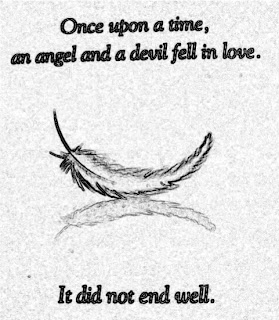