Sexy badass Irish druid who battles a god? Sure. I’ll sign up for that. Wait…he’s how old? 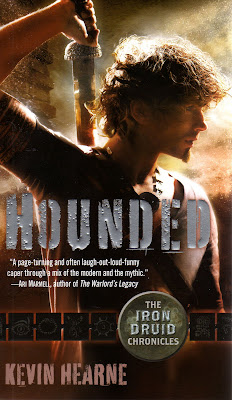 “Atticus O’Sullivan, last of the Druids, lives peacefully in Arizona, running an occult bookshop and shape-shifting in his spare time to hunt with his Irish wolfhound. His neighbors and customers think that this handsome, tattooed Irish dude is about twenty-one years old—when in actuality, he’s twenty-one centuries old. Not to mention: He draws his power from the earth, possesses a sharp wit, and wields an even sharper magical sword known as Fragarach, the Answerer. Unfortunately, a very angry Celtic god wants that sword, and he’s hounded Atticus for centuries. Now the determined deity has tracked him down, and Atticus will need all his power—plus the help of a seductive goddess of death, his vampire and werewolf team of attorneys, a sexy bartender possessed by a Hindu witch, and some good old-fashioned luck of the Irish—to kick some Celtic arse and deliver himself from evil.”


I kept coming across this book and its series while searching for Julie Kagawa’s Iron Fey series, and thought “Self, why not give this book a try? It doesn’t sound half bad.” So checked it out for the ol’ Kindle (I love being able to check out books from the library on my Kindle…) and started to read. And the book had me instantly hooked from the first paragraph, and the rest of the book was an amazing and kept my undivided attention.

Atticus is, thankfully, a light hearted leading man. Don’t get me wrong: he’s a badass. He can heal and rejuvenate his body and enhance his on magical ability by merely making contact to the earth. He can wield fight and oh yeah, he can do a bit of shape shifting. Atticus has a great sense of humor and a great story telling voice that made the story fun to read. And I hate to compare leading men, and no one can replace my love for Harry Dresden, but I would rather hang out with Atticus O’Sullivan as he would probably be an awesome drinking buddy with his Irish lilt and would probably have some stellar stories to tell. Harry Dresden, not so much of a party guy as he does seem to be a bit of downer with all the crap that Jim Butcher seems to put him through (really Harry Dresden…I love you. You will always be my main man, you just seem to be carrying a lot of baggage lately.)

The writing flows nicely and there are some really amazing one liners and dialogue between characters. My favorite intersections are between Atticus and his Irish wolfhound, Oberon. That’s right Atticus has a telepathic link to his dog. Which I totally wish I had because then maybe my dog would actually listen to me and I would be able to understand why she insists on licking everything and eating my daughters crayons. Anyway, the conversations with his dog always seem to ground Atticus to the present. It seems that Oberon makes Atticus appreciate the now, because let’s face it, Atticus is super old and though he drinks his herbal teas that keep him young and his mind stable, he does tend to have his mind go back to his ancient past. And I love stories with dog. On top of that, I have always wanted an Irish wolfhound.

This book was great from start to finish. There was no lag in the story. Kevin Hearne kept the story moving constantly and all the characters were interesting and fun. Even the bad guys were interesting. After reading this, I instantly went on goodreads and added the entire series to my to-read list. I really do need to make the time to read book two. I need some time with the fun loving and long lived Atticus O’Sullivan.

But really? Does he have to be twenty-one centuries old?!