Adventure awaits for Darwinist and Clanker alike in Istanbul. Let the action begin! 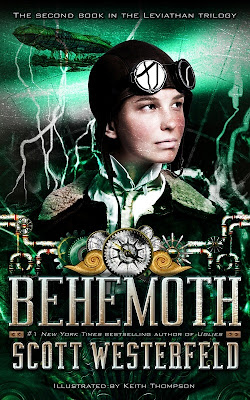 “The behemoth is the fiercest creature in the British navy. It can swallow enemy battleships with one bite. The Darwinists will need it, now that they are at war with the Clanker powers. Deryn is a girl posing as a boy in the British Air Service, and Alek is the heir to an empire posing as a commoner. Finally together aboard the airship Leviathan, they hope to bring the war to a halt. But when disaster strikes the Leviathan's peacekeeping mission, they find themselves alone and hunted in enemy territory. Alek and Deryn will need great skill, new allies, and brave hearts to face what's ahead.”

I do love a great book series? Don’t you? And this second book in Scott Westerfeld’s Leviathan series does not lack in adventure or character development. Which is always nice. There is a good balance of the point view shifts between Alek and Deryn. Both points of view show us how they grow confident they grow in their own decision making and their strengths and weaknesses are displayed and put to the test. Alek being left without his trusted adviser, him being the one to make the decisions and hope that they are good ones. Deryn being in charge of a secret mission that fails, and then fleeing to Istanbul in search of Alek and also struggling with her growing feelings for the young prince.

All the action scenes were well written and easy to imagine. Though this is an alternative steam punk reality of World War I, there is no problem suspending reality and accepting that yeah, there are giant steam powered robot elephants walking around Istanbul. And of course there is a giant whale who is a hydrogen breather that is used as an airship. Totally.

We are introduced to a few new, interesting and pivotal characters that help propel the story moving forward: revolutionaries and newspaper men, and strange new fabricated beasties. Each new character and all their words were not misplaced and everything had a purpose. No plot fodder.