The poor pretty farm girl turns out to be a Faery Princess? Of course. Who didn’t see that one coming? 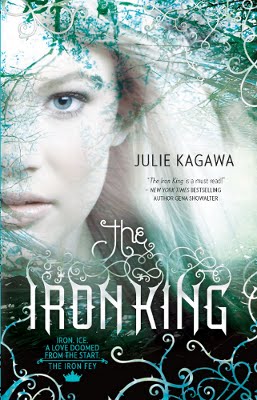 “Meghan Chase has a secret destiny; one she could never have imagined. Something has always felt slightly off in Meghan's life, ever since her father disappeared before her eyes when she was six. She has never quite fit in at school or at home. When a dark stranger begins watching her from afar, and her prankster best friend becomes strangely protective of her, Meghan senses that everything she's known is about to change. But she could never have guessed the truth - that she is the daughter of a mythical faery king and is a pawn in a deadly war. Now Meghan will learn just how far she'll go to save someone she cares about, to stop a mysterious evil no faery creature dare face; and to find love with a young prince who might rather see her dead than let her touch his icy heart.”

So to be completely honest, I’m not too sure what caught my attention regarding this particular book. I don’t think it was the cover. It wasn’t the description of the book because it sounds like every other young adult book out there. Maybe it was something that I found on Goodreads and thought, what the heck? And to be honest, I tried reading this book about a year ago and it just didn’t pan out for some reason or another. Pretty sure it had something to do with another book I actually wanted to read. But I did finally get to reading this book, and I have to say, I’m glad I did.

Granted, it had most of the typical young adult staples in it, and we all know what they are so I will not go too much into it. I have never read a faery novel before so I wasn’t too sure what to expect. I enjoyed the classic literary characters of Puck, Oberon, Titania, and Mab. The beautiful and deadly description of the world of the fae was fun and interesting. I loved the idea of the Iron Fey, because well, it makes sense really. We live in a world where imagination is tied directly with technology. How often do you hear anymore of Nature and it’s great inspiration? Not too much really. So the epic battle between Old and New is a good back drop for the story.

I found some of passages harder to read than others because Megan is like every other young adult female lead, moody and petulant, and the Winter Prince  was just like every other tragic male lead who is drawn to the heroine but is mean to her but then makes some play like she’s his saving grace. The only character that was well written was Robin Goodfellow, aka Puck. But of course, he got shafted in the end.

I enjoyed this story. It left me pleasantly surprised and my interest is slightly peaked to read the second book in the series. Good job Ms. Julie Kagawa. You might have gotten yourself a fan of your book series…