We all have rules. But Rhiannon’s rules usually include a billy club cracking a few skulls. 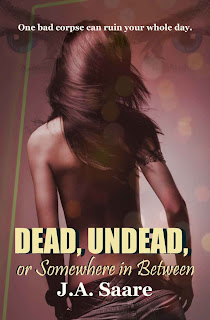 “One bad corpse can ruin your whole day. No one knows that better than Rhiannon Murphy.
She left behind the flash and sass of Miami for the no-nonsense groove of New York City, eager for a clean slate and a fresh start. A bartender by trade, a loud mouth by choice, and a necromancer by chance; she managed to keep her nifty talent hidden from those around her—until now. The deliciously good-looking vampire, Disco, knows her secret. When he strolls into her bar to solicit help investigating the mysterious disappearances of his kind from the city, Rhiannon discovers he’s not the kind of person that appreciates the significance of the word no. But in a world where vampires peddle their blood as the latest and greatest drug of choice, it’s only a matter of time before the next big thing hits the market. Someone or something is killing vampires to steal their hearts, and unlike Rhiannon, this isn’t their first stroll around the undead block.”

My dear friend Jenn lent this to me through the Kindle and I have to say, the internet is amazing. Anyway, I was in need of something adult and not young adult and figured: Necormancer, vampires, the heroine who is bartender in a strip club. You know some bad ass action is in store for the reader.

I must say that I was pleased. I was in dire need of some action in a book and Ms. J.A. Saare delivered. It was sassy and fun, filled with language that any pirate would be proud of, and an interesting twisting mystery of murdered vampires.

I liked that Rhiannon is, for lack of a better phrase, full of true grit. She’s comfortable in her own skin and with who she is and she doesn’t really care what you might think of her. And if she needs, she'll whoop your ass with her home made billy club. The supporting characters helped show her rang of emotional highs and lows and her growing power as a necromancer. Saare developed a fun female lead that you cannot help but root for.

I was, however, put off by the brutal retelling of Rhiannon’s past as well as the baw-chicka-wah-wah scene with Disco and Rhiannon. To me, it just seemed a little too excessive. I felt slight uncomfortable reading the two scenes, like I had accident walked in and saw something I shouldn’t have seen or heard.

Overall, a great book with an amazing twist at the end that left me saying “What in the hell just happened?!” I am totally going to have to read the second installment of the Rhiannon’s Law series.