Oh Ms. Clare…a sequel to your YA Victorian Steampunk Shawdowhunter series, known as The Infernal Devices?! My oh my! I think I have a case of the vapers! 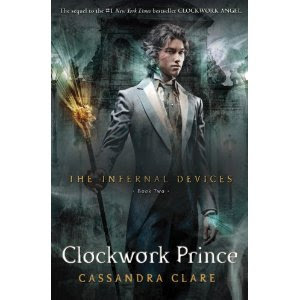 “In the magical underworld of Victorian London, Tessa Gray has at last found safety with the Shadowhunters. But that safety proves fleeting when rogue forces in the Clave plot to see her protector, Charlotte, replaced as head of the Institute. If Charlotte loses her position, Tessa will be out on the street and easy prey for the mysterious Magister, who wants to use Tessa's powers for his own dark ends. With the help of the handsome, self-destructive Will and the fiercely devoted Jem, Tessa discovers that the Magister's war on the Shadowhunters is deeply personal. He blames them for a long-ago tragedy that shattered his life. To unravel the secrets of the past, the trio journeys from mist-shrouded Yorkshire to a manor house that holds untold horrors, from the slums of London to an enchanted ballroom where Tessa discovers that the truth of her parentage is more sinister than she had imagined. When they encounter a clockwork demon bearing a warning for Will, they realize that the Magister himself knows their every move and that one of their own has betrayed them. Tessa finds her heart drawn more and more to Jem, though her longing for Will, despite his dark moods, continues to unsettle her. But something is changing in Will; the wall he has built around himself is crumbling. Could finding the Magister free Will from his secrets and give Tessa the answers about who she is and what she was born to do? As their dangerous search for the Magister and the truth leads the friends into peril, Tessa learns that when love and lies are mixed, they can corrupt even the purest heart.”

I cannot tell you how awesome it was to get this book from my mother-in-law for Christmas. I actually stopped reading a book to read this one. And I am so glad I did. This is such an amazing book. Better than the first, which was totally amazing as well! We delve deeper into the mystery of who is Tessa Grey and there is also some baw-chicka-wah-wah action in this book that had me blushing. Cheeky Ms. Clare!

I have found in the YA supernatural/paranormal genre, there always seems to be some kind of love triangle. This annoys me most of the time. But Cassandra Clare is so good, that I totally forget about the love triangle between Tessa, Jem and Will. We see Tessa’s heart being pulled in both directions, but she’s a smart enough girl that she has bigger problems. I find all of Clare’s female characters are a good combination of tough and vulnerable, and none of those characters are the same. I enjoy the Infernal Devices series a little bit more I think because I fell that Tessa is strong and determined, while Clary from Mortal Instruments is moody teenage girl.  Both characters are strong, but I feel Tessa is a better rounded and written character in that there is a mystery around who she is, something that even she doesn’t know.

In this book, there is more action and intrigue in the hunt for the elusive Axel Mortmain, the Magister. We still don’t know what he wants with Tessa (which is honestly driving me crazy trying to figure out!) but the hunt for him is urgent in that the Institute is what’s at stake. The little surprises that are revealed throughout the book only lead to more mysteries and enigmas that can only be unlocked in the next book, Clockwork Princess. This book read more like a detective story than a YA supernatural/paranormal one. Which, is exciting because I hate when I get all moody like a teenager, being that I am almost thirty years old.

Thank you Cassandra Clare for making me want more and totally having a love/hate relationship with the waiting for Clockwork Princess to be written and put in my greedy little hands. Because I need to know what happens!!