A zombie point of view story where the zombies are getting “better”? I am sensing a trend… 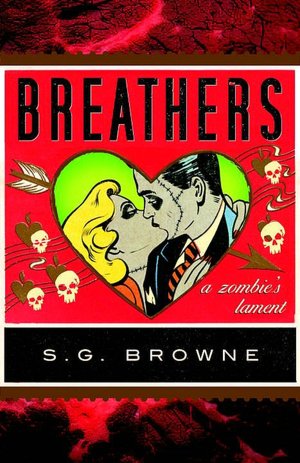 “Meet Andy Warner, a recently deceased everyman and newly minted zombie. Resented by his parents, abandoned by his friends, and reviled by a society that no longer considers him human, Andy is having a bit of trouble adjusting to his new existence. But all that changes when he goes to an Undead Anonymous meeting and finds kindred souls in Rita, an impossibly sexy recent suicide with a taste for the formaldehyde in cosmetic products, and Jerry, a twenty-one-year-old car-crash victim with an exposed brain and a penchant for Renaissance pornography. When the group meets a rogue zombie who teaches them the joys of human flesh, things start to get messy, and Andy embarks on a journey of self-discovery that will take him from his casket to the SPCA to a media-driven class-action lawsuit on behalf of the rights of zombies everywhere. Darkly funny, surprisingly touching, and gory enough to satisfy even the most discerning reader, Breathers is a romantic zombie comedy (rom-zom-com, for short) that will leave you laughing, squirming, and clamoring for more.”

Let me preface this review with this little back story.

Me reading this book is a case of cover love. I just thought it was so clever and cute. And I have an affinity for covers. A stellar cover is usually a determining factor in me picking out books to read (i.e. Cassandra Clare’s Mortal Instrument series). So I put this book in my GoodReads list of “to-read” and my dear friend Jenn (who is my Zombie Apocalypse Sister in Arms) told me in a few words, I have this book, you can borrow it, but don’t get your hopes up. I should have taken this as a warning.

The idea of Breathers is good. Clever even. And the writing is pretty decent. There’s a bit more humor in this zombie POV than in Warm Bodies (see my review!). And that’s where my praise for this book ends. Yeah. Sorry Mr. Browne. I had a hard time getting into this book. It was just sort of blasé. Oh! Good word! Anyway…I’m going to break down this review by what this book promised to deliver on and fell short on doing.

1.       “Darkly Funny.” Now, don’t get me wrong, folks who are fans of this book, there were some funny parts in this book that made me chuckle. But most of the time I was too busy trying to decided if I should feel bad for Andy for the stuff him and zombie-kind put up with, or smack him like a bitch because he’s acting like one. There is only some much “but you would only understand if you were a zombie” to describe how it is to be a zombie. Honestly, see it as a cop-out for trying to weave emotions into a zombie and making us, the readers, understand.

2.       “Surprisingly touching.” Really? Are you sure? Are those zombie support meetings that Andy goes to suppose to make us feel a deeper connection to zombie-kind because honestly, I was left not feeling surprisingly touched, but more bored. I suppose having Andy and the others start to magically “heal” and the emotions of dealing and then to have Fate piss all over it could be seen as touching, but I just couldn’t get behind Andy as a hero. I get that his life sucks, but dude, really? Grow a pair of balls and be a George Romero zombie for Christ sake!

3.        “Gory enough to satisfy even the most discerning reader.” Liar, liar, pants on fire! Yeah, the zombies eat people. But where’s the fury? The hunger? The natural urge for survival? Oh wait. It’s totally not there. There is only one scene where Andy finally acts like a zombie and chomps on his psychiatrists face. The rest of the time, Andy and company are feasting on “Breathers” like they are at some family get together. Just because zombies are eating regular humans, doesn’t mean that it is gory. Gross? Yes. Gory? Well, let’s just say that I think whoever wrote the little summary on the back of the book didn’t look up the word gory.

Can you tell I was totally unimpressed with this book? And yes, I realize I sound like a colossal asshole but I speak merely on my own brand of personal truth. I have no problem with the idea of a zombie POV novel, I don’t. And I’m sure S.G. Browne is a lovely man. He can totally write. It’s good. I just think this one fell kind of short of the finishing line.