Let me tell you, I love this book. 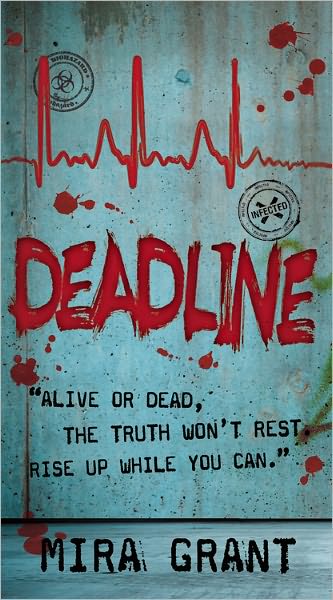 “Shaun Mason is a man without a mission. Not even running the news organization he built with his sister has the same urgency as it used to. Playing with dead things just doesn't seem as fun when you've lost as much as he has. But when a CDC researcher fakes her own death and appears on his doorstep with a ravenous pack of zombies in tow, Shaun has a newfound interest in life. Because she brings news-he may have put down the monster who attacked them, but the conspiracy is far from dead. Now, Shaun hits the road to find what truth can be found at the end of a shotgun.”

This is the second book in the Newsflesh series by Mira Grant and I have to say, it is great! There are a few flaws here and there, but I’ll get to that. Let’s talk about why it’s so awesome.

So I have a feeling most people were probably shocked by the level of action from the first book, Feed. And to that I say, well duh! What did you expect? The first book was told from Georgia Mason’s point of view, while this book is told by Shaun. I like the differences. It makes sense. Georgia was a Newsie, so everything was to the point and factual and she tried to make us see the truth of her words. With Shaun, well he’s an Irwin, so of course there’s going to be zombie hordes and bombs and such things! Would you expect anything less?

The back and forth of Shaun teetering on the edge of sanity was a nice insight into Shaun as a person. From Georgia’s POV, we see him as a little naïve; always the follower and never the leader, always the Irwin, ready to be the first one to die. But, when Georgia is murdered, Shaun’s world crashes and all he has left is a raiment of her. Her voice speaks to him and guides him. His coping mechanism shows the depth of grief and loss on reality. Without Georgia telling him what to do, he seems lost in the world. We see how she was all he had, and he was all she had. They were as close as any siblings could be. It was a nice change of pace from the first book. I enjoyed Georgia’s wise cracking and intellectual voice, but I felt that Shaun’s was more raw and emotional.

But, when the End of Times blog new site gets a surprise visit from a CDC agent on the run and then gets firebombed by the CDC for a zombie outbreak, Shaun gets fired up and somewhat takes control of the situation around him. There are mentions in the book of how all he wants to do is cut and run, but knows deep down that by doing that he would not only let his staff of bloggers down, but that he would never find out who murdered his sister.

I enjoyed the idea of how our society has broken down under the fear of infection, though in the end, when we die, we just get back. So we are already infected, it’s just a matter of time. I mean, it kinda is already happening if you think about it. The fear breaking down our society, not a super mutant zombie virus infection.

I am also pleased to find that a little bit of the conspiracy is revealed. People who have conditions like Georgia, where her eyes had the live infected zombie cells without her being a zombie (they are called reservoir conditions), could actually get better, but this news is being withheld by the (dum dum dum!!) CDC! However, we don’t get to see the whole big picture, only some of it. Because, well….

Shaun gets attacked by a zombie. That’s right. Big chunk taken out of his arm. Oh! Twist! He gets better. Yeah. Totally. I won’t tell you the super big spoiler that I feel really is a twist that should have been saved for the beginning of the third book, Deadline.


My only complaint about the book was the time wasted in describing who the blood testing machines work. I get what Grant was doing, exploring the emotions of getting tested: “do I live another day as me, or is this the time I turn?” But really, I was over the whole testing procedure in the middle of Feed.
So read Feed, and read Deadline. Granted, it’s more thiller than zombie horror, but if you are like me, you’ll devour this book. Yum. :)