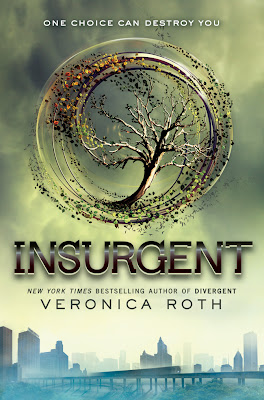 “One choice can transform you--or it can destroy you. But every choice has consequences, and as unrest surges in the factions all around her, Tris Prior must continue trying to save those she loves--and herself--while grappling with haunting questions of grief and forgiveness, identity and loyalty, politics and love.
Tris's initiation day should have been marked by celebration and victory with her chosen faction; instead, the day ended with unspeakable horrors. War now looms as conflict between the factions and their ideologies grows. And in times of war, sides must be chosen, secrets will emerge, and choices will become even more irrevocable--and even more powerful. Transformed by her own decisions but also by haunting grief and guilt, radical new discoveries, and shifting relationships, Tris must fully embrace her Divergence, even if she does not know what she may lose by doing so.”

Let me preface this review in saying that I did like this book. The world is interesting and there is a unique twist at the end (that for some reason I feel like I should have seen coming), however, that being said, I felt like this book was a bit of a letdown for me.

The book picks up where Divergent left off: in a train car heading away from the city. I felt that the action in the book was lacking. I understand that there must be those down times in books to watch the characters reflect and to grow and converse with one another. However, I felt that Tris, who was so brave and kind of a badass in the first book, withered down to a husk of the hero she was. Granted: dealing with grief and guilt and trying to come to term with what is going on…I get. But damn girl, suck it up. You can’t radically change a character like that.

However, things did sort of turn around and pick up near the end, good story telling back in place and Tris search and hunting for answers all the while being hunted for being Divergent. The bad guys seemed to be a little to Sniddly Whiplash for me, mustache twirling while giving away their master plans of domination, but by doing so, much is revealed. By telling you, it would be spoilers (picture that in River Song’s voice), but just know that at the end, you’ll probably be thinking the same thing I was: “I should have seen that coming.”

Of all the complaining let me say again that I liked this book. The story telling was good and the writing is well done, I felt a little hollow over reading it since I gave such praise to Divergent. There will be a third book, I can tell you that from the cliff hanger at the end, and I will read it. Let’s hope though, that this will only be a three book series, but honestly, I don’t know how much longer things in Tris’s world can last and not implode all together.