My heart is all a flutter. Why? Because this book is featuring the Doctor. And not just any Doctor…my favorite Doctor: THE EIGHTH DOCTOR!


The first settlers of New Jupiter were a handful of humans, with androids to help make the planet habitable. Many generations down, the New Jupitan President, John E Hoover, faces a challenge to his hereditary role. His popularity is threatened by the Association of New Jupitan Independence – ANJI – who want to establish New Jupitan Independence. So Hoover has set up an Earth Theme Park – Earthworld. It is nearly complete and will enormously boost the planet's income from off-worlders – and thus the President's popularity. So Hoover has no intention of telling anyone that there are people entering Earthworld who are mysteriously never seen again. Meanwhile, the president has triplet daughters to succeed him in his hereditary role. Unbeknownst to him, they have been tampering with Earthworld's androids – but why? And can the Doctor find out before the problems of New Jupiter get out of control?
Let me preface this review by saying this: Paul McGann’s Eighth Doctor is my favorite. I root for the underdog and in the history of Doctor Who, this particular regeneration was shafted. All he got was a US made for TV movie. And granted, it is SO dated with big shoulder pads and 90’s hair and some of the acting and actors. But Paul McGann…he was glorious. He brought the Eighth Doctor to life. The Eighth Doctor is a passionate romantic. He is gallant and brave and his hard edges (which all Doctor’s have) are sharp with wit.
But even though the Eighth Doctor didn’t get the TV series he so deserved, he does have a TON of books, audio plays, and comic books. And can you believe that I am just now getting to reading an Eighth Doctor adventure? Oh! It was so much fun! The Eighth Doctor was completely recognizable and the companions, Fitz and Anji, were wonderful. The book, in essence, is a true Doctor Who tale. Lots of monsters and running and mystery and loony-tune characters. But there is a little more heart in it. It’s not just some creature feature or a gut wrenching tale made by the devil himself, Stephen Moffatt. The author, Jacqueline Rayner, was able to show us the inner turmoil of Fitz and Anji that is churning deep inside them. Rayner made Fitz and Anji reliable narrators sharing their own unique point of views of the Doctor. I loved the story of the book.
BUT………
How can I explain the big “BUT…”(Hahaha! I made myself laugh with that sentence.) This book was a published by BBC Books. The edition I have is a special one for the 50th Anniversary of the character. One would THINK that they would take the actual time and EDIT the book. Like, properly. I’m not just talking about someone saying to the author “I think you might need to go back and fix this bit” or “You know, have you tried this approach” or “This is crap.” I’m talking about simple spelling, grammatical, and CHARACTER NAMES IN THE RIGHT PLACE. BBC makes a TON of money every day off of Doctor Who, especially during the 50th Anniversary from 2013. Take the time to actually make sure you are putting out quality stuff instead of being so concerned pumping out stuff for Whovian’s to through their money at. As a true lover of books and storytelling, NOTHING pulls me out of a tale faster than an editing error. If it’s just like one or two, I’m fine. It happens. You can’t catch everything. I know I am guilty of flubs all the time in my own writing. BUT, there were quite a few things that in my mind, ruined the reading experience for me. I stumble across the obvious mistake and I’m jolted out of the story. Then, I have to dive back in. It’s annoying to say the least. I mean, Hello BBC! You’re a huge corporation. Get it together man.
Other than the whole lack of editor bit, the book itself was not too bad. The format was a little hit and miss for me. The dialogue was a bit awkward in how it was written. I did enjoy the emails that Anji was writing on her phone but never sent until the end and in the end she got a “fatal error.” Anji’s story is a bit sad. As is Fitz’s. I feel like the Eighth Doctor is drawn to and attracts these semi tragically romantic characters. Read the book. You’ll get what I’m talking about. Now, I don’t regret getting this book. I love it, despite its flaws because the one thing that Rayner did get right was the awe and wonderment of the Doctor through someone else’s eyes. And the Eighth Doctor was perfectly written. (And on a side note...the only Doctor I find so dreamy. Le Sigh.)
I have other Doctor Who books that chronicle different regenerations. All of them are fun because I’m just an avid Whovian. And granted, this one, is by far not the most well written book, but hot damn is it a fun ride.

Thank you so much for stopping by and reading my blog! I hope you have an amazing Christmas and New Years!


Remember to always be yourself. Unless you can be a pirate. Then always be a PIRATE! 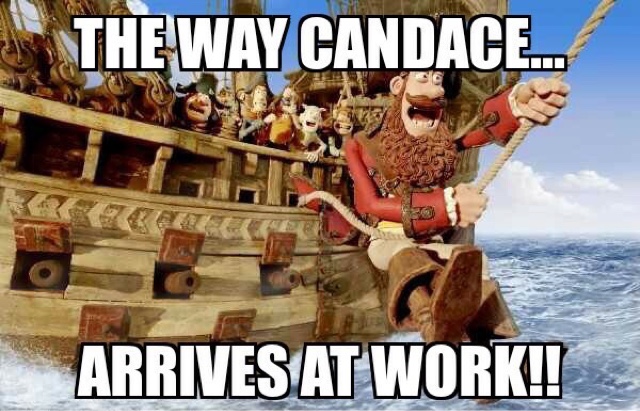