Now onto our regularly scheduled review... 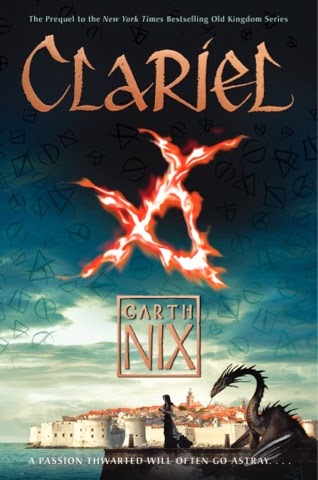 Sixteen-year-old Clariel is not adjusting well to her new life in the city of Belisaere, the capital of the Old Kingdom. She misses roaming freely within the forests of Estwael, and she feels trapped within the stone city walls. And in Belisaere she is forced to follow the plans, plots and demands of everyone, from her parents to her maid, to the sinister Guildmaster Kilp. Clariel can see her freedom slipping away. It seems too that the city itself is descending into chaos, as the ancient rules binding Abhorsen, King and Clayr appear to be disintegrating.

With the discovery of a dangerous Free Magic creature loose in the city, Clariel is given the chance both to prove her worth and make her escape. But events spin rapidly out of control. Clariel finds herself more trapped than ever, until help comes from an unlikely source. But the help comes at a terrible cost. Clariel must question the motivations and secret hearts of everyone around her - and it is herself she must question most of all.

So there have been so many books and so many book series, but Garth Nix's Abhorsen series is honestly by far my favorite. Completely. Truly from the bottom of my heart. However, I feel like this is not a widely read series so many people might not know what the heck  is going on in Nix's beautiful, brutal, and breath taking world (gotta love alliteration). In short, the books follow a family known as the Abhorsen. They are sort of like necromancers but instead of calling up the dead, they send them through the the different gates of death. They use bells to have the dead do what they ask and they can actually walk through death. Oh. And death is like this other world. Like I said. Beautiful. Brutal. Breath taking.

But I better stop there about what the series is about. Otherwise, you would be reading for quite a while.

Though Clariel is book 4 in this series, it's a prequel to the story itself. The first books are Sabriel, Lireal, and Abhorsen. So you might be asking yourself "so if this is a prequel, can I start with this book. Um. No. You need to read the first three books first. The reason being is that you will have a better understanding of this unique world. Also, there are certain things mentioned in this book that are fun to reflect back on. Clariel is actually a character that reappears in Lirael, but you know....as River Song would say "Spoilers!"

Nix did a brave thing I think. Instead of a book about Lireal and Nicholas, or even Sabriel and Touchstone (read the books. You will see), he opted to tell us a story about  Clariel...a girl who really deep down in her soul is a hermit. And she's not really all that much of a likable character. And that's interesting. She goes beyond being an anti hero. How can I explain this? Clarial is the type of character that in every other book, is the border line villain, someone who probably needs to be save from herself.

And you know what? I loved it. I loved that this girl did not really give two shits about anything other than herself and her own wishes to leave everything behind. This book could be seen as a cautionary tale...one that says be careful what you wish for, you might get a big boot in your ass.

This is a fantasy novel so there are times where the story drags and feels tedious. But stick with it. You'll be pleasantly surprised. The writing is beautiful though. Each word carefully chosen to reflect a particular character. The ending of the boom is EPIC and that alone should be enough.

"But Candace" you asking, "what happens?!" Mm mm...sorry. Read the books. Spoilers.

This book, like the others, just makes me happy. It breaks away from the typical young adult formula, daring to be literature rather than just brain candy. Don't get me wrong brain candy is nice, but Clariel is a strong and fiercely independent young woman who at the same time is so flawed and so borderline unlikable, that it's refreshing. She isn't pining away from some dude. In fact, she doesn't really care about relationships and sex at all. All she wants is to live amongst the trees and live in solitude. And sadly, that doesn't happen. There. One sorta spoiler. Not necessarily a happy ending.

Do me a favor and read this book series. Please! Because I really need other people to talk about with!

Thank you for reading
Remember to always be yourself. Unless you can be a pirate. Then always be the pirate!!