I cannot believe I am just now discovering this book! Ugh!! 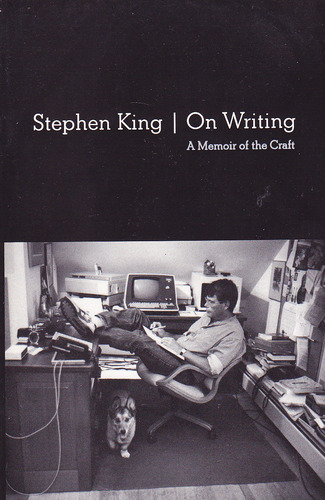 “Part memoir, part master class by one of the bestselling authors of all time, this superb volume is a revealing and practical view of the writer's craft, comprising the basic tools of the trade every writer must have. King's advice is grounded in his vivid memories from childhood through his emergence as a writer, from his struggling early career to his widely reported near-fatal accident in 1999 -- and how the inextricable link between writing and living spurred his recovery. Brilliantly structured, friendly and inspiring, "On Writing" will empower and entertain everyone who reads it -- fans, writers, and anyone who loves a great story well told.”

Let me preface this review with this statement: I have never read anything by Stephen King. That’s right. Never ever. I don’t know why to be honest. I think it’s just a combination of being distracted by some other book at the book store and being genuinely disinterested in Stephen King. Yeah. I’ve seen Carrie, The Shining, Pet Cemetery, Misery and Green Mile (which let’s be honest, didn’t see that one coming). I felt like I didn't actually need to read the stories as I have seen its movie counterpart. I am a HUGE and  UNFORGIVING book snob, and along with the two above mentioned reasons of not reading any King, I also kinda felt he wasn’t worth my time.

Mr. King: if you are reading this (and I totally doubt you are), I apologize for being such a moron. How can I judge a writer if I haven’t read any of their works. And I know this book was written almost fourteen years ago, but I just want to say thanks. This book has totally inspired me.

Alright, groveling out of the way…

I was told to read this book by my friend Jeff, fellow wordsmith and storyteller. He didn’t suggest that I read it. No. Told me. And I am so glad I did what I was told to do. This book is part memoir part “these are the do’s and don’ts of writing.” That combination would assume that this would be a boring book. But it’s not.

The first part of the book is King’s life story (up until 1999 where he is hit by a van…we’ll get to that). He was very sneaky in slipping in tid bits of writing 101. The second part of the book is about what King calls a writer’s Toolbox. He goes into what he finds important in writing and the things that worked for him to make him insanely successful. The man has put pen to paper on over 150 different stories including short stories and books that are both fiction and non-fiction. Out of all that huge number, 50 have been books. As someone who one days wishes to be published, this book is honest and inspiring. Have I used that word too much? Well, shit. It’s true! This book makes me want to sit down and write until my carpel tunnel flares up and push through the pain. I want to stay up all night completely brain dump all my ideas, good and bad. And when I wake in the morning and I’m dragging as at my 40 hour a week job, I’m totally alright with that. This book helps keep the fire lit for my dreams to create new worlds and escapes for people to read and fall in love with (or hate. Whatever. As long as there is some reaction in the end).

Let me share with you one of my most favorite quotes from this book. I have it highlighted on my Kindle:
"If you expect to succeed as a writer, rudeness should be the second-to-least of your concerns. The least of all should be polite society and what it expects. If you into to write as truthfully as you can, your days as a member of polite society are numbered, anyway."

This book is a freaking breath of fresh air for someone, anyone, who feels that they aren’t good enough. Or they are stuck, written themselves into a corner, or they are battling with thoughts of killing off parts of their story. This book is for writers. How King puts his words down on paper makes you feel like he is sitting right there with you, spilling his guts to you, and only you. It’s pretty awesome.

What really got me was the third and final part of the book. It is a brutal retelling of that time in 1999 when he was hit by a van. A VAN. His descriptions of what he went through had me cringing and my heart breaking and brought out the insurance claims adjuster in me and the angry human being who cannot believe that the guy how almost killed Stephen King didn't spend a single minute in jail. Zero. However, it was his wife that brought him from the brink of nothing and without words, told Mr. King that it was time to get back to writing.

On Writing has inspired me to look for other books on, well, writing. I need to find those little gems that keeps the fire lit under my ass to continue to create and purse my dream of getting published. It is not going to be easy. In fact, it’s going to be pretty damn hard. But, as long as I love the world I’m creating, and I’m actually attempting to make something shiny and new, then I’m okay with that. This will be the book I go to prior to Camp NaNoWriMo and NaNoWriMo every time. I cannot wait till I can read this book again.

Until next time.
Remember to always be yourself. Unless you can be a pirate....then ALWAYS be a pirate!!