These three books…they are late night. Late night as in Skin-imax late night. Her Mad Hatter:
Alice is all grown up. Running the Mad Hatter's Cupcakery and Tea Shoppe is a delicious job, until fate--and a fairy godmother with a weakness for bad boys--throws her a curveball. Now, Alice is the newest resident of Wonderland, where the Mad Hatter fuels her fantasies and thrills her body with his dark touch.The Mad Hatter may have a voice and a body made for sex, but he takes no lovers. Ever. But a determined fairy godmother has forced Alice into Wonderland--and his arms. Now, as desire and madness converge, the Hatter must decide if he will fight the fairy godmother's mating--or fight for Alice. Gerard and His Beauty:
A not so classic retelling of Beauty and the Beast, as seen through the eyes of the villain...
Betty Hart has had it with men. Jilted in love, her life now consists of shelving books by day, watching too much Anime by night, and occasionally dressing up like a superhero on the weekends with her fellow ‘Bleeding Heart’ nerds. Men are not welcome and very much unwanted. Especially the sexy Frenchman who saunters into her library reeking of alcohol and looking like he went one too many rounds in the ring. Gerard Caron is in trouble. Again. Caught with his pants down (literally) he’s forced to seek asylum on Earth while his fairy godmother tries to keep Prince Charming from going all ‘Off with his head’. Maybe, messing around with the King’s daughter hadn’t been such a great idea after all, not that Gerard knew the silly redhead was a princess. But his fairy godmother knows the only way to save his life is to finally pair Gerard with his perfect mate, whether he’s willing or not. From the moment Gerard lays eyes on the nerdy librarian he knows he must have her, but Betty is unlike any woman he’s ever known. He thought Betty would come as willingly to his bed as every other woman before her, but she is a woman who demands respect and even… horror of all horrors… love. Is it possible for a self-proclaimed Casanova to change his ways? 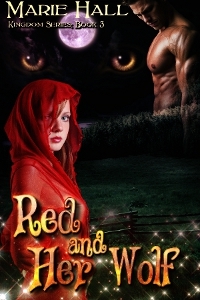 You know there comes a time in every reader’s experience where your brain is just kind of dead. You just hit a wall, and you really can’t seem to find anything to break that slump you’re in. What do I do? Well, I read smexy books. You know what I’m taking about. At the library and book stores they are under “ROMANCE.” But, this being me, I read those paranormal romance-exotica. I just call them smexy books.
The Kingdom Series is a 6 book/novella series that follows Dankia, a fairy godmother, and her parade of hot, super smexy, and very bad fairy tale story boys. Thanks (once again) to my dear friend Jenn, she found these books on Amazon and told me about them. I got the 3 book bundle for my Kindle. Each story I read in about 2 or 3 hours.
Oh yeah…super steamy and totally…yeah…*cough* *cough*
But these stories were not merely boring plot and idiotic characters just waiting for a chance to bone. No. The characters are fun and quirky. They are somehow relatable. As an amateur story teller (one day I’ll be published, damn it!), I’m a believer in letting the story go and write itself. And if that story requires some baw-chick-wah-wah, or some ultra violet action scene, then so be it. That is what these novellas, I feel, do well. A story is developed and do (to some extent) care for the characters and you root for the ladies (or in Wolf’s case, bad boy) trying to win the hearts of those the Dankia has matched them with.
Out of the three books, I preferred the tale of Betty and Gerard, as Betty is a nerd girl and I can relate to wanting to be a super hero by night. I mean, hello. I compare these book to the Goldilocks trying out the Three Bears stuff: Her Mad Hatter was a little to whimsical for me, Red and Her Wolf was a little too dark for me. But Gerard’s Beauty…just right. I won’t go into too much detail as to why this is my favorite out of the three, because...um, hello…spoilers. Just know that that it involves Gerard’s masculinity and a 30 day time line.
So far, this series has me intrigued and I defiantly want to read the other three books, just to see what will become of the other bad boys of the fairy tale world of Kingdom. My only niggle with this book is the obvious editing flaws: misplaced pronouns and misspelled words or even sentence that just don’t seem to make sense. These things do set my teeth to grinding, however, despite that, totally enjoyed these three books. If you’re looking for a quick fluffy read filed with unexpected and quirky romance and a heavy helping of smexy time, then check these books out on Amazon. The three book collection I got was $2.99. Not bad for stories about fairy tale body boys reformed by love if you ask me.
Until next time…Remember to always be yourself, unless you can be a pirate, then always be the pirate.