Steam punk? Post-apocalyptic world were Martians have invaded making our world a snow covered waste land? A swash buckling hero with a catchy name that so happens to be the title? Should be a no brainer, right? 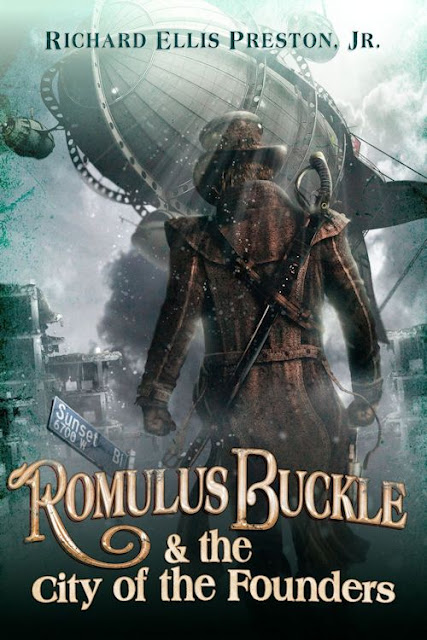 “In a postapocalyptic world of endless snow, Captain Romulus Buckle and the stalwart crew of the Pneumatic Zeppelin must embark on a perilous mission to rescue their kidnapped leader, Balthazar Crankshaft, from the impenetrable City of the Founders. Steaming over a territory once known as Southern California — before it was devastated in the alien war — Buckle navigates his massive airship through skies infested with enemy war zeppelins and ravenous alien beasties in this swashbuckling and high-octane steampunk adventure. Life is desperate in the Snow World, and death is quick. Buckle and his ship’s company must brave poisoned wastelands of Noxious Mustard and do battle with forgewalkers, steampipers, and armored locomotives as they plunge from the skies into the underground prison warrens of the fortress city. Captain Romulus Buckle must lead the Pneumatic Zeppelin and its crew of ne’er-do-wells on a desperate mission where he must risk everything to save Balthazar and attempt to prevent a catastrophic war that could wipe out all that is left of civilization and the entire human race.”

Alright all the formality out of the way, lets get on with this review. And the question is where to start? I really was intrigued simply by the title. I love a good title. It helps draw in the reader.  I mean, come on. “Romulus Buckle and the City of Founders.” What a freaking awesome title. The cover? Amazing. It draws you in. Title and cover: it just makes you want to snag this book up without question and poor yourself into the story.

Romulus Buckle himself is a great leading man for this type of tale. A tale full of adventure and daring deeds and heroic rescues. It is a swashbuckling hero filled with grandious ideas and  holds fast to his what he feels is right and wrong within the world he was born into. He is a fair and just Captain. He is a true and loyal friend. And a worth and frightening advisary. He is simply, a well thought out and planned character. All the supporting cast of characters were fantastic and just as lively and fun as Romulus himself. The devastating world that Richard Ellis Preston, Jr. created is intriguing. I enjoy the way he did not simply provide us with an information dump of how our world became this way. I like an air of mystery to a world that is dangerous and filled with tragedy and going to Hell in a hand basket. I like it when the author creates a world that makes you accept the surroundings, suspending your own idea of reality.

That being said…I did feel that there were lots of little flaws. And all these little flaws mix together in a bit of a big flaw. At least for me that is.

My main issue with this book is that, for me, it took too long to get to the good stuff that was promised to us in the description of this book. And then when the action came, I felt that it was too short and then suddenly the book was over. I understand world building, and I understand character description…but do I need chapter after chapter of character descriptions? Not really. Also, I felt that there were too many things left unsaid. And I get it, there is a book two. But, I so wanted more on the Founders. I wanted something to be revealed about Sabrina’s past. I wanted there to be more of a build up between Max the curvaceous half-Martian and Romulus. I finished this book and was just wanted more, more, and more.

I did like this book. It fell into the realm of just “okay” for me. I so wanted to like it more. I wanted to roll around in the steampunk dystopia end of the world that I felt like I was promised. But sadly, I finished this still feeling like there was something missing. It left me feeling hungry for so much more. I do have the second book, Romulus Buckle and the Engines of War, and I am hoping that I will get the answers I want so I am fat and happy with satisfaction. Get ready Romulus Buckle, as we are going to be spending some more quality time together. Please don't disappoint me.