That’s right ladies and gents! I’m back! After a month of none stop writing (I didn’t write for one day, but it was the 4th of July) for Camp NaNoWriMo, I have returned triumphet in that I reached my 50k word count goal. I am a winner! My novel, which is tentatively called End is the Beginning but will more than likely change to Doll Parts, is not quite done story wise. My main characters, Ruby and Finn, decided to yank the reins of the story away from me and well now they are in a pickle I’m trying to write them out of. I believe I have come up with a writing schedule that will work for me, which will included blogging time. I miss reviewing books: the good, the bad, the ugly…miss it so much.

But, to start off my immersion back into the blogging world, I bring to you a feature that I thought was just too cute: Momo’s Choice. For those of you who don’t remember or don’t know what the hell Momo’s Choice is, it’s where I take pictures of my teacup Chihuahua, Momo, with books that she “picked out.” It’s honestly a way to mess with her. She hates getting her picture taken so it’s a fun challenge to sneak up on her and, POW, take her picture.

So let me stop with my yammering and bring to you lovely folks Momo’s Choice! 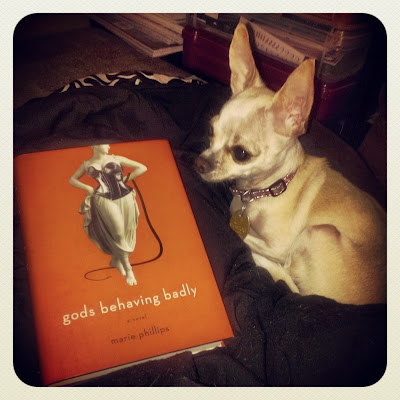 Being a Greek god is not all it once was. Yes, the twelve gods of Olympus are alive and well in the twenty-first century, but they are crammed together in a London townhouse--and none too happy about it. And they've had to get day jobs: Artemis as a dog-walker, Apollo as a TV psychic, Aphrodite as a phone sex operator, Dionysus as a DJ.

Even more disturbingly, their powers are waning, and even turning mortals into trees--a favorite pastime of Apollo's--is sapping their vital reserves of strength.

Soon, what begins as a minor squabble between Aphrodite and Apollo escalates into an epic battle of wills. Two perplexed humans, Alice and Neil, who are caught in the crossfire, must fear not only for their own lives, but for the survival of humankind. Nothing less than a true act of heroism is needed-but can these two decidedly ordinary people replicate the feats of the mythical heroes and save the world?

Why it’s Momo’s Choice:  It’s got a sassy cover.

Why I do think of the book? This book I bought a few years back and I remember it was because of the cover (shocker there. Are you surprised?). Then I read the story and I loved it. The gods are seen for what they are and that is completely selfish and Alice and Neil are really just as Plain Jane and Joe Schmo as you can get. I groaned at out loud and I laughed hysterically at the surprisingly idiotic human jealously and revenge that the gods do to each other. If you are looking for a great read to break up the monotony of what you normally read, I highly recommend this book.

There you have it! Momo's Choice. I'll try to keep up with Momo's Choice on a weekly to biweekly basis. Depends on how crazy things are around my neck of the hood.

Remember folks, to always be yourself.
Unless you can be a pirate...then always be a pirate!
Arrgh me maties and yoo hoo!