Who is Momo? She is my little 4 year old teacup chihuahua. She is a bit of a stinker, a spoiled brat, and loves to snuggle and take advantage of her humans. In return what do I love to do? Take silly photos of her! And I thought, you know? Why not take pictures of her with some of my favorite books? God Lord, I said to myself, I am brilliant! So, here is the inaugural post of a new little feature. We'll see how long Momo can stand me taking pictures of her. 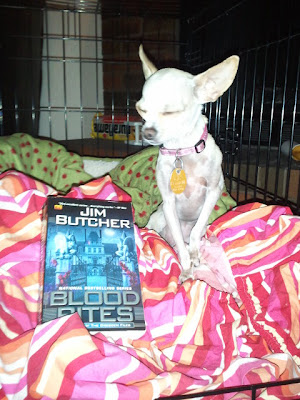 For Harry Dresden, Chicago's only professional wizard, there have been worse assignments than going undercover on the set of an adult film. Dodging flaming monkey-poo for instance. Or going toe-to-leaf with a walking plant monster. Still, there's something more troubling than usual about his newest case. The film's producer believes he's the target of a sinister entropy curse-but it's the women around him who are dying, in increasingly spectacular ways.

Harry's even more frustrated because he only got involved with this bizarre mystery as a favor to Thomas, his flirtatious, self-absorbed vampire acquaintance of dubious integrity. Thomas has a personal stake in the case Harry can't quite figure out, until his investigation leads him straight to Thomas's oversexed vampire family. Harry is about to discover that Thomas's family tree has been hiding a shocking secret: a revelation that will change Harry's life forever.

Reason for being one of my favorite books: Sexy leading man, mysterious bad guys, humor, and some awesome ass kicking.

Reason for Momo's Choice: we get introduced to Mouse, the little puppy that ends up in books to come to play in an important part in Harry's life.

Well, that's all for Momo's Choice. This is an book series that beings with Storm Front and should most definetly be checked out. Go forth and read my friends!