So I figured I’d save some time and review two books at once…I mean…they are in the same series. And it is a short review of both books. 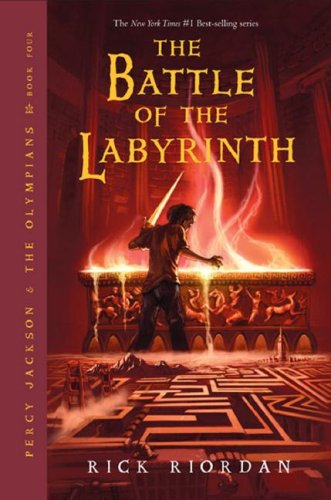 "Percy Jackson isn't expecting freshman orientation to be any fun. But when a mysterious mortal acquaintance appears on campus, followed by demon cheerleaders, things quickly move from bad to diabolical. In this latest installment of the blockbuster series, time is running out as war between the Olympians and the evil Titan lord Kronos draws near. Even the safe haven of Camp Half-Blood grows more vulnerable by the minute as Kronos's army prepares to invade its once impenetrable borders. To stop them, Percy and his demigod friends must set out on a quest through the Labyrinth--a sprawling underground world with stunning surprises at every turn."


The Battle of the Labyrinth seems to be an Annabeth-centric story. Granted, the tale is told by Percy, but the main focus seems to be put on Annabeth. And thankfully, it wasn’t as a romantic interest, though those feelings do start to peek through. We see Annabeth as she tries to hide her struggles with leading a quest. She is stubborn almost to a fault. When the minor god Janus appears down in the Labyrinth, we see her at her weakest as a bit more the prophecy concerning the Big Three’s children is revealed a little bit more. This tale ends leaving up wondering what is yet to come for Camp Half-Blood and the gods of Olympus, who are slowly being turned against but demi-gods and minor gods alike.  I think my favorite character in the entire book was the Labyrinth itself. Its constant changing made for fun reading because you never knew what the Labyrinth would throw at our heroes. It’s trickery only bested by Rachel Elizabeth Dare, the mortal who can see through the mist. She is able to lead them through the ever changing maze. She is an interesting character that builds up to be a very important character in the next book.

"In this momentous final book in the "New York Times"-bestselling Percy Jackson and the Olympians series, the long-awaited prophecy surrounding Percy's 16th birthday unfolds. As the battle for Western civilization rages on the streets of Manhattan, Percy faces a terrifying suspicion that he may be fighting against his own fate."


So not the best description...but this book is by far the most dangerous and action packed for Mr. Jackson. The Last Olympian did have me wondering…who is the Last Olympian? More action packed and emotional than the previous books, we see Percy make decisions that will curse him and make him a hero all at once. But I'm not telling you who the last Olympian is, that's something you can read for yourself.  I think my favorite part of this book when Percy takes a dip in the River Styxs in the Underworld. It is terrifying and emotional. From Achilles’ plea for him to turn away, to the pain that Percy goes through, to realizing who means the most to him and what saved him. Percy’s dip in the River Styxs makes him practically indestructible, but at the same time, leaves him venerable. We see Percy struggle to keep his pride and power in check, because that is really the curse Achilles’ is talking about: allowing oneself to become cocky and arrogant, thinking that they are unbeatable. Pretty deep for a kids book, huh?  But alas, the story ends with the Titans defeated (I’m not telling you how, that you’ll have to find out on your own) and finally Rick Riordan introduces a little romance: Annabeth and Percy play kissy face in a bubble under the water. Yeah. Nice one.

Here’s what I love most about the Percy Jackson Series: they make me forgot that I am reading books that are meant for my eleven year old nephew. That’s a sign of an awesome book in my mind. All the references are, of course, a bit kid friendly, but I can these books and not be concerned over feeling all pre-teen angstiness. Riordan does this magic trick that allows me to be sucked into his book with his great action scenes. I’m so glad I was able to be sucked into the world of Greek gods. Makes me want to be a demi-god myself.