You know when you see a movie and then read the book and you are so happy you saw the movie first? 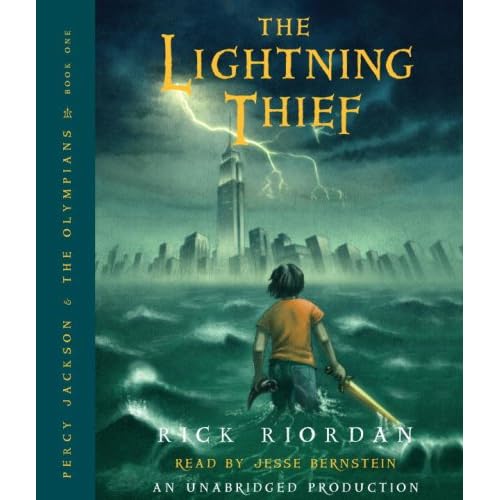 “After getting expelled from yet another school for yet another clash with mythological monsters only he can see, twelve-year-old Percy Jackson is taken to Camp Half-Blood, where he finally learns the truth about his unique abilities: He is a demigod, half human, half immortal. Even more stunning: His father is the Greek god Poseidon, ruler of the sea, making Percy one of the most powerful demigods alive. There's little time to process this news. All too soon, a cryptic prophecy from the Oracle sends Percy on his first quest, a mission to the Underworld to prevent a war among the gods of Olympus.”
I am so glad I saw the movie first before starting to read the first book of Rick Riordan’s Percy Jackson and the Olympian series. Because, if I read The Lightening Thief before seeing the movie, well, I would have been mad. But we are not here to talk about the movie; we are here to talk about the book.
My husband read the entire series so I felt obligated to read it too. He was so excited describing all the action scenes and telling me all the stuff the movie left out. And, I totally have to agree: action packed with a hint of pre-teen snark. Percy is what we Mortal call a troubled kid, but all those Mortal problems equal to him being a demi-god, or what the book calls them, half-blood. To me, Riordan wrote Percy older than a twelve year old kid. He handled himself more like a teenager, moody and impulsive. Riordan’s descriptions of all the things that were happening to Percy drew me into the story: The Minotaur attacking him, his mom and Grover, The fight on the bus with the Furies. Percy hanging out at the bottom of the Mississippi, Percy and Annabeth being tricked into a trap that was meant for the god Ares. (FYI: None of these awesome scenes were in the movie.) All these action scenes were rich and well developed that it made it easy to forgot that Percy is just a kid battling huge monsters and on a quest to retrieve Zeus’s master Lightening Bolt.

But, unlike in the movie, we find out that there is not only did Zeus get jacked, so did Hades.  BUM BUM BUM!! That’s right. Hade’s Helm of Darkness (which make the wearer invisible) is stolen, there for allowing the thief to also get away with the stealing from Zeus. The chapters where Percy, Annabeth and Grover were in the Underworld were probably one of my favorite parts of the book. Not just for the plot twists and turns, but also for how the Underworld is described. The toll booths funneling in people to be judged for the kind of life they lived was an interesting take on how the afterlife might look. The guards around Hades’ stronghold were probably my favorite touch, in that they were dead soldiers from throughout time. The darkness that Riordan is able to inject into what is suppose to be a children’s book is the right amount of scare and action.


***SPOILER FOR THOSE WHO HAVEN’T SEEN THE MOVIE**
Percy and his pals are successful in returning the stolen items to Zeus and Hades and they return to Camp Half-Blood victorious heroes. But, when leaving camp do they find that who they thought was their ally and friend, someone close to them, is a traitor and working for the Olympian’s father, Kronos: Luke. Yeah, Luke did it. Well he is the son of Hermes.
Now this little bit here is movie versus book discussion. Having read the book, I’m kind of sad they cut so much out that they weren’t able to put in the whole theft of the Helm of Darkness and Kronos rising to kill the Olympians. Which means no big final scene at camp with Percy and Luke . I felt in the movie, that they didn’t really capture the anguish and anger that consumed Luke.  He is for sure going to be a formidable enemy for Percy in the rest of the books. At least, that’s what I am told.
This is a great book for kids. It introduces Greek mythology to a younger audience  without it being well, boring. I know when I was in school, as much as I loved learning about Greek mythology, I always found it kind of dull. But even now, as an adult, I learned so much. I can’t wait till my nephew reads this book. He’s like a sponge and I know he’ll just gobble this story up.

It’s always awesome when you can do a bit of learning while being totally entertained at the same time.