Get those cold showers ready, ladies. This steampunk-esque romance is quite steamy. See what I did there? Steampunk. Steamy. Oh...never mind... 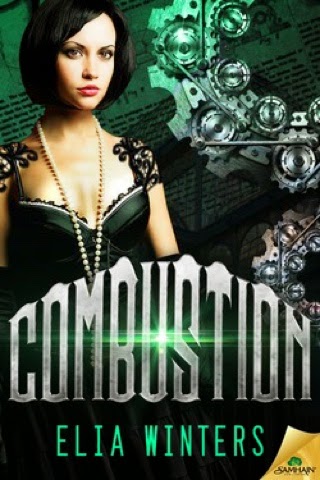 For explosive chemistry, all you need is the right catalyst…A war orphan, Astrid Bailey is content living her adult life alone, working as a contract machinist. Her real passion, though, is inventing felicitation devices that promote women’s sexual empowerment and help them find pleasure independent of a man.The upcoming World’s Fair, with its substantial cash prize, is an opportunity to open theshop she’s always imagined and hopefully solve her financial woes. Except the committee has denied her entry unless she obtains a “sponsor”. Astrid suspects they mean “male”.Eli Rutledge, noted watchmaker, knows entering the fair will solidify his reputation asan innovator —but he’s fresh out of ideas. Until Astrid approaches him with her outrageous product line. With no other options, though, he agrees to lend her his good name. As construction heats up, so does their chemistry—and the complications. Astrid is unaccustomed to asking for help, much less sharing credit. And Eli fights an attraction that could spell professional disaster. As the Fair date approaches, Astrid and Eli must decide how far they’ll go. For the business…and for each other.
So a couple formalities before the review:
First, I want to thank Samhain Publishing and Netgalley for providing me with a copy to read and review. Thank you kindly! This book has a publication date to the masses of May 5th 2015.
Second, this book is...well...how should I put this? This book is late night. Like Skin-amax with a steampunk feel and a better written plot. It is a romance novel but don't worry, it's not like that Fifty Shades of Gray crap. But! It is very smexy. So very smexy. It is not for the faint of heart. That being said, if you are easily offended or get flustered/embarrassed at the mere mention of sex, well. Skip over this review and maybe check out one of my other reviews.
Anyway, on with this spoiler free review!
For those of you who don't know what steampunk is let me break it down for you. The cut and dry definition of steampunk are works that are often set in an alternative history of the 19th century's British Victorian or America Wild West. There is a lot of steam powered devices and very unique and interesting (sometime hair brain) ideas for machinery and inventions.
I'm going to attempt to review this without going too much into story and  Books like these I normally read after reading something that was super intense of full of lots of emotional drama. Sometimes your brain needs some junk food. And this book, though extremely well written, was that. It was fun and though there seemed to be attempts at deeper meaning and intended conversations about female sexuality, it was still light. As books like this should be. I mean, it's a steampunk inspired tale. Instead of something like cool weapons, you have a woman who makes sex toys. Boom. I said it. I went there.
The characters that this tale focuses on are thankfully not completely vapid airheads who only care about boning. No. Astrid and Eli are looking to enter and win an invention contest at the World Fair. They have legitimate ambitions. They wish to have success. And no. I'm not going to tell you what the invention is. It's a spoiler and also, well, I'll get all embarrassed and blush if I told you. So, that's interesting. But as well written as these characters are, they are still the archetypal romance novel characters. Astrid is the sassy and strong female who just needs the right man to love her, but she doesn't know it. Eli is just as stubborn as Astrid, and she finds her brash but he can't help but be drawn to her. It's a formula for this genre. But if it's it broke don't fix it. Elia Winters simply takes this formula and tweeks it just enough to make it her own. Two type A personalities meet and sparks fly. And it's well written.
Your probably sitting there thinking "Hey, this is a romance novel. What about the sex?!" It's there. Hello. It's a requirement. And thankfully those sexy time scenes aren't just like "oh hey. What's up? Let's bone." The smexy scenes are written to flow with the narrative. I'm someone who doesn't mind a sex scene, as long as it moves the story along, contributes to the overall plot of the story. Now, I know that's deep for a what some would call a simple romance novel. However, I see that as a sign of someone who is good at there craft. So what if it's a "trashy romance novel"? Doesn't mean it has to be badly written.
Overall, this was a remedy to all the overwhelming emotional drama of the Vampire Academy book series I'm trying to get through. Those books are great and I do like them, but sometimes one needs a break from vampires, teenage drama, and Feels. So, why not take a two day break and read some smexy book? And a well written sexy time book at that! Like, proper sentence structure and grammar usage while they are getting it on and begging for more. Remember, grammar matters.
Once again, thanks to Samhain Publishing and Netgalley. Appreciate ya. Also, the publication for this is not until May 5th. So you may have to wait a bit if your interested in reading this. Just remember, longing makes the heart grown fonder.
Thank you so much for reading. If you have a few, leave me a comment. Or if you have any book suggestions.
Until next time. Remember to always be a pirate. Unless you can be a pirate. Then always be a pirate!
Labels: Netgalley smexy time Romance Samhain Publishing