Strap in for some heavy hitting and super intense emotions and actions. Holy moly…this one had me run ragged at the end of this…

By way of a staggering deception, Karou has taken control of the chimaera rebellion and is intent on steering its course away from dead-end vengeance. The future rests on her, if there can even be a future for the chimaera in war-ravaged Eretz.
Common enemy, common cause.
When Jael's brutal seraph army trespasses into the human world, the unthinkable becomes essential, and Karou and Akiva must ally their enemy armies against the threat. It is a twisted version of their long-ago dream, and they begin to hope that it might forge a way forward for their people.
And, perhaps, for themselves. Toward a new way of living, and maybe even love.
But there are bigger threats than Jael in the offing. A vicious queen is hunting Akiva, and, in the skies of Eretz ... something is happening. Massive stains are spreading like bruises from horizon to horizon; the great winged stormhunters are gathering as if summoned, ceaselessly circling, and a deep sense of wrong pervades the world.
What power can bruise the sky?
From the streets of Rome to the caves of the Kirin and beyond, humans, chimaera and seraphim will fight, strive, love, and die in an epic theater that transcends good and evil, right and wrong, friend and enemy.
At the very barriers of space and time, what do gods and monsters dream of? And does anything else matter?

So let me start off in saying that this is the last book in this series. And I have determined that this is one of my favorite series ever. And this book was everything that the first two were. But man oh man, it was a doozy to read and get through. What do I mean you ask? I shall explain.

Not sure how many of you folks have read anything by Dan Brown, but if you have, then think about to books like Digital Fortress, or his most famous books, the Robert Langdon series. Think about how those were written. You have the main protagonists POV that is clear and concise for the most part. Then, the bad guys and other supporting characters are randomly thrown in for good measure to mix it up and confuse the hell out of you. Then, at the very end, you need eye protection for all the random loose ends that are flying about to come together at the end. Remember that? Got that picture of story telling in your head? Okay. That was this book. And don’t get me wrong. I love Dan Brown. I love the Robert Langdon books. They are fun bits of thrilling fiction. And Taylor’s third installment in her series was just amazing. But the story telling was just all over the place. And I don’t need to have everything be in order, but I don’t want to have to try to remember a specific incident from something that happened four chapters ago.

The writing is beautiful and all the characters are wonderful. At first, I did think that Eliza was a completely waste of character though. I just kept reading thinking “Why was this character introduced in the final book?” But not wanting to give anything away about who and what she is, I still felt like she was a wasted character. And as it always happens when you have such a HUGE cast of characters, I found that I completely lost interest in the two characters this entire series is built around. Karou and Akiva just became too tortured for me. I felt like they became too self absorbed and I just wanted to shake them both like “Hello! Focus! You got a war you have to deal with right now!” I was drawn to the Ziri, who truly understood sacrifice. Also, Zuzana who showed so much determination and grit (that’s right. I said grit!). It’s almost as of Taylor picked the certain emotions or themes and motifs and inserted them into the characters of her story. Which is great, I loved that…but…shouldn’t have the main focus been on Karou and Akiva being all these things? Because all I really read was a lot of wallowing in self pity.

Wow. As I look back at what I just wrote, you would think that I didn’t like this book. But I really did! I think I just went in with expectations that I felt weren’t really met. Yes, the story was well written (except for the whole Dan Brown structuring. Just doesn’t work …), but for me, it just felt like something was missing. I’m just happy that none of the main characters were killed off brutally and without warning. Thank you for that Ms. Taylor. Yes…I’m still bitter and angry at Veronica Roth for her pissing on her loyal readers with Allegiant.

If you are looking for something exciting and different to type of story, totally check out this series by Laini Taylor: Daughter of Smoke and Bone, Days of Starlight and Blood and finally this book, Dreams of Gods and Monsters. It’s tragic. It’s beautiful. And it’s original. All I have to say is that you better strap in and have a box of tissues with you because these books are not for the weak of heart and will most defiantly get the Feels a’flowing.

Thanks for reading guys. I know it's been a while since my last blog post, but hey, that happens when you have a family you have to run and work full time!
Remember to always be yourself. Unless you can be a pirate...
Then ALWAYS be a PIRATE!!
Until next time!! (which is hopefully going to be soon...) 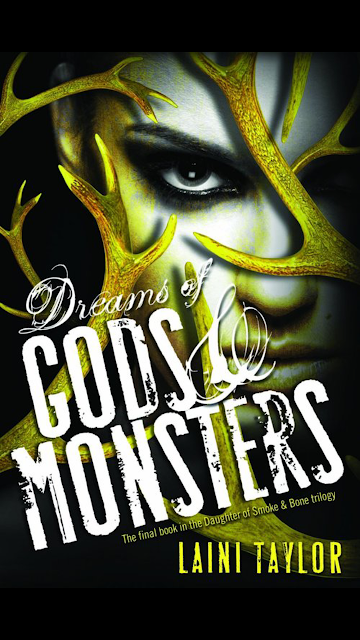