Get your shit kickers on. Rhiannon is back and stuck in the future. 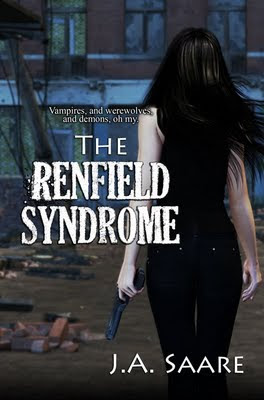 “Vampires, and werewolves, and demons, oh my. Rhiannon thought facing off against a deranged child vampire was the most dangerous task she would ever have to undertake, but she’s about to discover making a deal with a demon is far, far worse. Sent forward into another reality, one in which vampires are now dominating nearly extinct humans, she realizes the sooner she returns to her vampire lover, Disco, the better. Unfortunately, time changes a lot of things; including those most trusted around her. When she’s faced with a loss and betrayal unlike any she has ever known, her focus shifts from severing the debt between the demon that wants to kill her, to exacting a revenge that will bring forth consequences she never could have fathomed. By reaching out to the darkness lingering within her, she’ll find the strength to push forward despite the circumstances that would see her dead and buried.
After all, when it’s all said and done, all that she has left to lose is her soul.”

So….how can I review this book with its characters and plot that would not give away everything this book has going on for it? Well, I can’t. You lovelies will just have to start out with the first in the series, Dead, Undead, or Somewhere In Between, to truly appreciate J.A. Saare’s amazing ability to take a genre that everyone thinks they know, flip it around changing it into something that you would have never expected.

What I really enjoyed best about this book, is that Rhiannon, who in general is a total bad ass with a mouth of a pirate, stays who she is throughout the whole book. Sure, there are some scenes that test her resolve and her own person ethics, however, she always comes out as a strong female who really doesn’t need saving. Don’t get me wrong, it’s nice to have a Prince Charming come and save you, to sweep you off your feet. But sometimes, the Damsel in Distress can do her own saving. And Rhiannon can honestly, most of the time, take care of herself. Trust me. Read the books.

What I love about Saare’s writing style is that there is not long drawn out prose explaining the reality Rhiannon lives in. There are no wasted words. And I like that. Sure, sometimes you need the wordiness for a complex world in a book. Saare writes with efficiency that says, in short, here is what happens and here is how it is, now let’s go open a can of whoop ass. See? No word or plot fodder.

As you can read, I didn’t really go too much into the book in its plot or characters. And that’s just because I honestly couldn’t think of a way to do so without, as River Song would say, Spoilers. But let me say this, this book for the reader who is not faint of heart, because lordy lordy, the ending is not only brutal, but it will leave you scrambling for the next book.